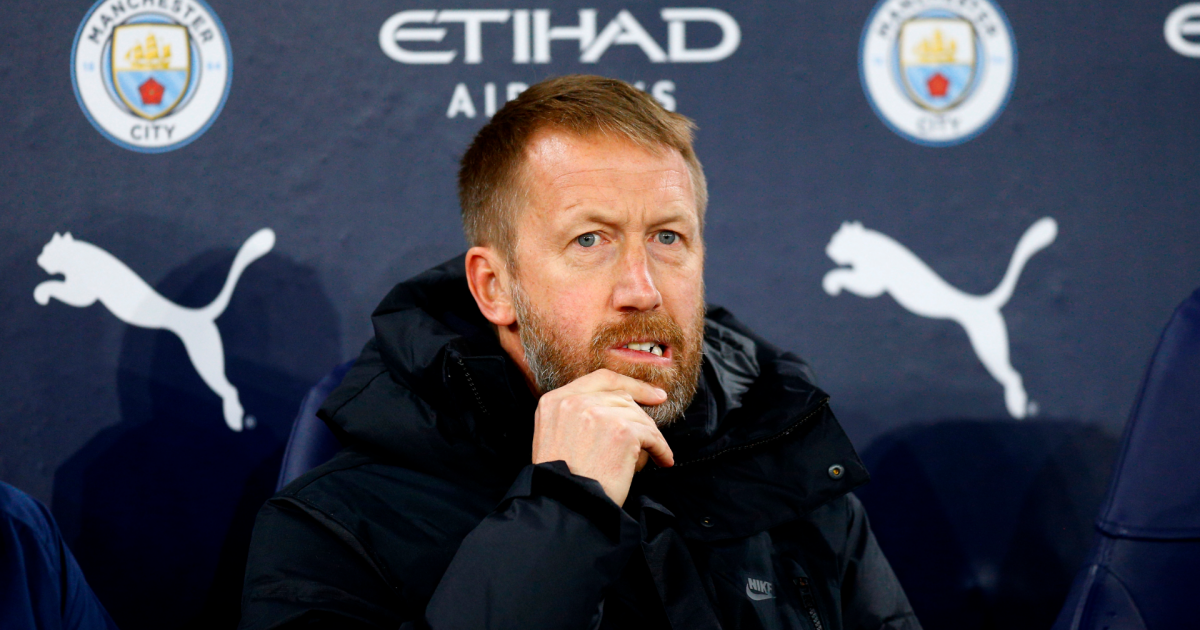 Pressure continues to build on Graham Potter’s shoulders following their latest embarrassing defeat, this time a 2-1 loss to rivals Fulham at Craven Cottage.

Just a four days earlier there was a mutinous air to the Chelsea end at the Etihad Stadium as their team subsided to a dismal 4-0 loss against Manchester City in the third round of the FA Cup.

Riyad Mahrez scored twice via a free-kick and the second of two penalties clumsily given away by Graham Potter’s side. The first came courtesy of a galaxy-brain handball from Kai Havertz, Julian Alvarez converting despite antics from Kepa Arrizabalaga that led to Gary Lineker dubbing the Chelsea goalkeeper a “Poundshop Emi Martinez”.

Even allowing for their considerable first-team injury list, a Chelsea line-up containing the ineffective Jorginho and Hakim Ziyech, alongside Havertz and Mateo Kovacic — each substituted with little cause for complaint at halftime — cost a lot more than a couple of pounds.

There was a youthful component to the Blues team too, and a feeling the likes of Lewis Hall and Bashir Humphreys were being undersold by their senior counterparts as City danced rings around them for Phil Foden to score a wonderful third.

Chelsea were booed off by a section of those fans who had bothered to stay around at the end of both halves, with chants celebrating Potter’s immediate predecessor Thomas Tuchel feeling like a particular dagger for the former Brighton & Hove Albion manager.

“We can’t do anything apart from do our jobs better, work harder, and you understand the supporters’ frustration,” Potter said afterwards. “We respect that but our job is to do our job and keep working, see the situation for what it is.”

How much longer this remains Potter’s job, with Chelsea 10th in the Premier League, out of both domestic cup competitions and having won three of their past 13 games (one in 11 if we take the Champions League out of the equation), is now a live issue.

According to Sky Bet, Potter is the second favourite to be the next Premier League manager sacked. Leading the betting is Everton boss Frank Lampard who, of course, preceded Tuchel at Stamford Bridge.

If we are into a familiar endgame a mere four months after one of the brightest coaching talents in the English game was appointed, then why are we? And why does this scenario feel so very Chelsea?

On the face of things, it’s really not looking great for Potter. Chelsea did not muster a shot of any description during the first half against City on Sunday, as they bowed out of the FA Cup in the third round for the first time since 1998. Things hardly improved in the defeat by Fulham.

The Blues did not have a touch inside the City box until the 54th minute and their overall xG of 0.09 was their lowest expected goals figure in five seasons.

Recent history continues to be unkind when comparing Potter’s record to his predecessors. Counting from Andre Villas-Boas’ ill-fated reign in 2011/12, Potter has the lowest points-per-game return across all competitions of any permanent Chelsea manager, despite the considerably smaller sample size of 19 games in charge (for the purposes of this, assume that all competitions follow a league format, i.e. three points for a win, one for a draw, none for a loss).

Set against those who have gone before him, does Potter’s dismal dozen of won three, drawn two and lost seven of the past 12 games in all competitions qualify as a tenure-ending slump? The evidence certainly suggests as much.

Examining the final 12 games of the men above, none had a worse return than Potter’s current slump. Even Jose Mourinho’s shambling decline, where his second spell as Chelsea manager ended with the team a point above the relegation zone, featured four wins and five defeats over the closing stretch.

Lampard and Tuchel each won five of their final 12 games, albeit with the former helped by FA Cup wins over lower-league sides Morecambe and Luton Town. Maurizio Sarri and Antonio Conte each signed off with wins in cup finals, something that feeds into the wider conversation about Chelsea and the managers they appoint.

During the period in question, they won 10 major honours, including two successes apiece in the Premier League, FA Cup, Champions League and Europa League. Perhaps a culture of hire-and-fire isn’t all that bad.

It should also be remembered that this spell largely covers Roman Abramovich’s time as owner. Todd Boehly cannot be judged by these standards yet, although if Potter is dispatched as hastily as Tuchel was, the two men’s approaches will start to look indistinguishable.

Why do Chelsea sack so many managers?

Disputes over Chelsea’s current, previous and future managers tend to come back to perceptions of what sort of football operation the Stamford Bridge club are and what they might aspire to be.

For the modern Chelsea, this lurches between an emphasis on achievements and aesthetics and where that happens to land at any given moment. Do you want to win at all costs, or is how you win and the style of equal importance?

This duality can be traced back to the now well-trodden story of Abramovich deciding he wanted to buy a football club after watching Manchester United beat Real Madrid 4-3 in the second leg of a Champions League quarterfinal at Old Trafford, with the hosts going out 6-5 on aggregate after a stunning hat-trick from Brazil great Ronaldo for Los Blancos.

Abramovich was in thrall to the beautiful game but, much like Real Madrid’s continental juggernaut, he wanted to win. Claudio Ranieri did not do that in the first year after the takeover, so in came Jose Mourinho, who broke records and set new levels of excellence when winning in England.

However, it is fair to say Mourinho is not one of football’s great aesthetes. After the end of his first spell in charge early in the 2007/08 season, Chelsea were placed under Abramovich’s faithful servant Avram Grant. Then it was time for some Jogo Bonito in the form of ex-Brazil boss Luiz Felipe Scolari.

Scolari did not last a season, nor did Villas-Boas in 2011/12 — two men who, for the purpose of this framing, could be termed “project” managers. In between, Carlo Ancelotti came in as a proven winner in Italy and France and lifted the Premier League.

A third-placed finish in 2010/11 was enough for Abramovich to dispense with Ancelotti and appoint Europe’s bright young thing in Villas-Boas. It was former Chelsea midfielder Roberto Di Matteo, initially installed on an interim basis and without particular managerial credentials before or since, who delivered the trophy he craved in the Champions League.

Di Matteo tapped into the seductive idea of “getting” a club and having the “DNA” of a winner, while big brains like Villas-Boas were not to be trusted. The abrasive, combustible Conte came, conquered and then burned bridges. His compatriot Sarri was the next grand-schemes man installed and left after a year to join Juventus with a Europa League trophy under his arm and chants of “f*** Sarriball” ringing in his ears.

The next two Chelsea bosses are a little trickier to fit into these categories, with necessity being the mother of invention when it came to the Lampard and Tuchel appointments. A transfer ban meant Stamford Bridge was not the attractive place it had once been for top coaches, with Lampard leaving Championship Derby County to take over in 2019.

Chelsea’s all-time top scorer delving into their celebrated Cobham academy meant Lampard offered a romantic break from Stamford Bridge feeling like a pragmatic place. A talented, youthful core under an old favourite gave the Frank era the feel of a project, at least until big-money signings such as Havertz and Timo Werner failed to fire and he was sacked.

In came Tuchel, with pedigree from spells at Borussia Dortmund and Paris Saint-Germain and promptly won the Champions League, playing a pragmatic 3-4-3 he had seldom used in his career.

Tuchel was a winner, as those who chanted his name in Manchester will not hesitate to tell you, but Boehly decided he was not the man for his project.

Is Graham Potter the right manager for Chelsea?

For now, Potter is Boehly’s man, but a historically bad run of form will need to ease for him to avoid going the same way as those before him. The current injury crisis is informing Potter’s decisions as the transfer ban did Lampard’s in terms of the latest Cobham graduates getting some time in the first team.

Their continued presence would be a quick route to a feelgood factor if a few wins are collected, while Joao Felix is the latest target hit by Boehly’s scattergun transfer policy. Potter’s tactics have to become a counterpoint and quickly show a clear idea and method when it comes to winning matches.

Experienced coaches with more medals than Potter have been booted from Stamford Bridge by this point, up to and including Tuchel. With the German’s name on the lips of Chelsea fans, Potter has to quickly prove that his project is worth persisting with.

Injuries have been cruel and when the likes of Reece James and Ben Chilwell are available again, coherent patterns of play might emerge. The current ineffective shunts between formations is a red flag because it suggests a lack of conviction from a man appointed on the basis of his big ideas. The risible showing of some experienced professionals in Manchester implied some are not buying what Potter is selling.

Increasingly, a lurch back towards pragmatism feels more likely in the ongoing battle for Chelsea’s identity, especially with a growing number of proven coaches out of work. Potter needs a big win against Crystal Palace on Sunday to make sure he doesn’t become just another face passing through.