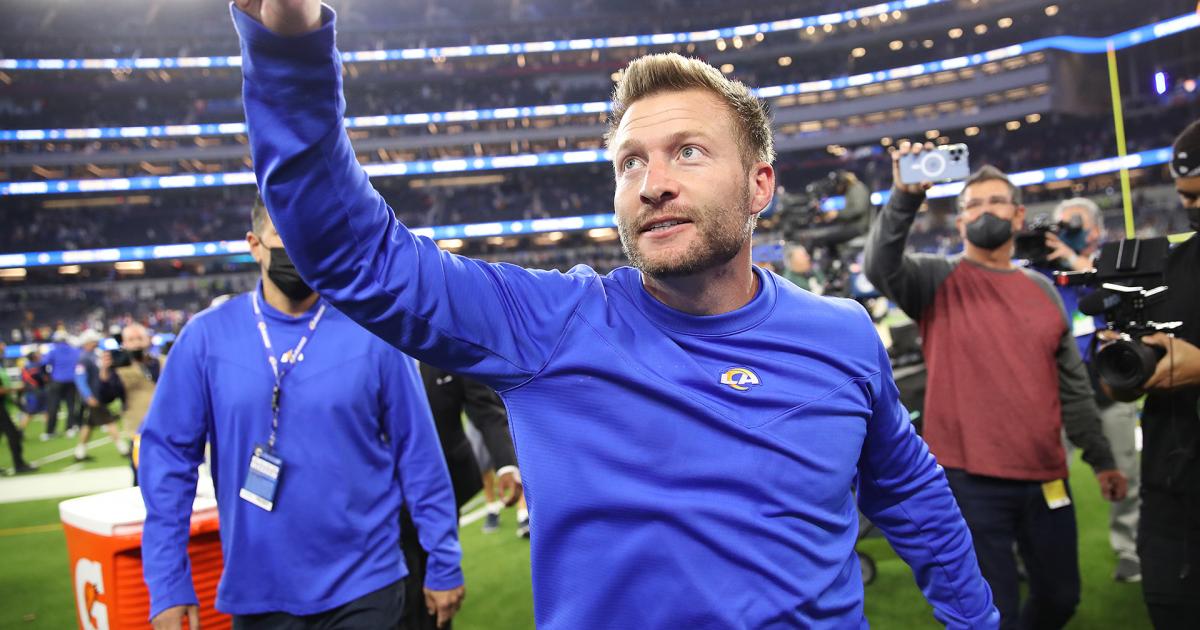 Update: Sean McVay has told members of the Rams coaching staff he plans to return as head coach for the 2023 season, according to ESPN.

Sean McVay is rumored to be stepping down from his head coaching job with the Rams.

Speculation that McVay could leave the Rams has been percolating since they won Super Bowl 56 and intensified this week when his assistants reportedly were given permission to seek other jobs. But McVay’s retirement would still be shocking considering his age and the success he has had coaching in Los Angeles.

McVay was the youngest NFL head coach ever hired, at age 30, but showed no signs of youthful struggles with the Rams. He has posted a 67-41 record in 108 career games (playoffs included) and tallied five straight winning seasons to begin his career. He brought the Rams to two Super Bowls and won one.

If McVay moves onto the next part of his career, what will that be? The 36-year-old would have plenty of options both within and without the NFL world. Here’s a breakdown of his three most likely paths.

IYER: 4 reasons why Sean McVay is right to leave the Rams now

If McVay is no longer interested in coaching, he would instantly become a top-tier target for TV networks. He already was after the Rams won Super Bowl 56, with some reports indicating that he could command a nine-figure salary to sign on with a broadcast network.

It’s easy to imagine McVay finding success in TV. He has a seemingly infinite recall of plays that have occurred during NFL games he has coached, so he would be able to remember interesting anecdotes and point to game-changing plays during a broadcast or as a studio analyst.

It also helps McVay’s case that he talks energetically and at a pace that is slow enough to understand him but quick enough to convey excitement.

As such, McVay knows that it’s less of a question of if a network would want him; it’s more about which one would shell out the most money to land him.

As it stands, Fox is probably set to lose Sean Payton back to the coaching market. That would create an immediate fit for McVay as a studio analyst, and then they could transition him into color commentary if they so desire. Remember, they have Tom Brady under contract, but as long as he is still playing, they will have openings on their broadcast team.

Fox may be the most likely network to target McVay, but NBC could also pursue him if they see him as a John Madden-like talent who can teach audiences about the game from the booth. After all, Cris Collinsworth is 63, so he could start thinking about retirement soon enough.

It’s a bit harder to find McVay a fit with CBS or ESPN, but the latter has made overtures to him before and could still be interested in his services.

And either way, McVay will have plenty of TV options if he decides to go that route.

If McVay decides to coach in the NFL again, he would instantly be regarded as the best coaching option on the market. That would allow him to choose where he wants to coach.

Of course, there have been rumblings that McVay wants to coach a contender, so that would potentially limit his landing spots in 2023. As such, he could wait to return until 2024 and target some potential openings at that time.

Below is a rundown of some of the jobs on which he could keep an eye.

If McVay wanted to get back in the saddle right away, he could be intrigued by the Denver opening.

The Broncos were bad under Nathaniel Hackett and averaged a league-low 16.9 points per game during the season. That said, the Broncos have a great defense and McVay could coach up an offense that was held back by the combined struggles of Hackett and Russell Wilson.

Either way, there is enough talent in Denver that McVay could consider it a landing spot. Add in that he is familiar with Ejiro Evero and could keep the defensive coordinator on staff and this might be a great match.

Here’s the other 2023 landing spot that stands out as a potential contender. The Panthers nearly made the playoffs in the NFC South despite starting the season 1-4, firing Matt Rhule and using three different starting quarterbacks. Imagine what they could do if McVay came to town.

McVay would be a great asset to the Panthers, as he would be able to develop whichever quarterback they select in the 2023 NFL Draft. The NFC South figures to be an even weaker division next year if Tom Brady leaves the Buccaneers, so the Panthers may end up being division favorites with their great defense.

Carolina’s offense would need an infusion of talent in order to be a true contender. McVay and Scott Fitterer can team up to create that.

If none of the current openings appeal to McVay, he could always wait until another job shakes open, be it after the playoffs or ahead of the 2024 season.

The Chargers stand out as a job that could appeal to McVay. They have an established quarterback in Justin Herbert and a lot of offensive weapons in Keenan Allen, Mike Williams, Austin Ekeler and Joshua Palmer. He could turn them into an even more explosive version of the team that Brandon Staley has while bringing over one of his many defensive assistants to coordinate a defense loaded with talent.

There are two questions about this opening. First, when might it be free? The Chargers made the playoffs in 2023, so Staley’s job may be safe for at least one more year. Second, would McVay really want to take a job from Staley, who hails from his coaching tree? That’s more of an unknown, especially if he’s picking from multiple openings.

So, in theory, the Chargers would greatly benefit from getting McVay and the coach would get a bevy of talent while staying in Los Angeles. In practice though, that position may not open for quite some time.

Here’s another one that may make sense for McVay. The Cowboys have made the playoffs in back-to-back years under Mike McCarthy, but what will happen if they fail to win a playoff game again? Jerry Jones may want to look elsewhere in the coaching market despite his fierce loyalty to his coaches over the years.

McVay would be a flashy hire for Jones and he would bring with him an offensive system that could get the most out of Dak Prescott.

That said, if Jones wants to move on from McCarthy, he probably would be more likely to target former Cowboys staffer Sean Payton — with whom he has a close relationship — first. Or Jones could choose to keep McCarthy for at least one more season. So, this is another job that isn’t guaranteed to open this offseason — or even next.

Ron Rivera’s job was never in jeopardy following the 2022 NFL season despite Washington failing to make the playoffs. Why is that? Dan Snyder wants some stability within the organization as he looks to sell it following a turbulent two decades in charge of the team.

Rivera is a great, respected leader and has been a solid coach throughout his career, but he has yet to log a winning season in Washington. A new Commanders ownership group would certainly respect Rivera, but they may want to bring aboard their own flashy hire to finish turning the franchise around.

McVay spent most of the early stages of his career with Washington as a tight ends coach and offensive coordinator. He helped lead Kirk Cousins to some of his most successful seasons to date.

McVay could relish a chance to work with the Commanders’ receiving weapons and restore fan faith in the once-great franchise. It wouldn’t necessarily require a rebuild either. He would just need to find a quarterback to make them an NFC East contender.

Sean McVay retires and steps away from football

Yes, as crazy as it sounds, the 36-year-old McVay could choose to ride into the sunset and step away from football entirely.

Retirement appeared to be on McVay’s mind after the Rams won Super Bowl 56. He was asked by the Los Angeles Times whether he would coach the Rams in 2022 shortly after earning his first ring.

Obviously, McVay eventually decided to return; however, it’s clear that he wasn’t convinced he’d remain in Los Angeles long-term and could be burned out from coaching after toiling as a head coach and coordinator for the last nine years.

McVay has now spent his age 22 through 36 seasons in the NFL, save for a brief, one-year stop with the UFL’s Florida Tuskers. He may just want to take a break and spend time with his wife, Veronika Khomyn, who he married during the 2022 offseason.

After all, it isn’t exactly a secret that family life isn’t always deal for those in the NFL.

Of course, some, like Pro Football Talk’s Mike Florio, have reported that McVay isn’t burned out. Per Florio, McVay just doesn’t want to be a part of a rebuild. Even if that’s true, McVay could afford to walk away from the Rams and stay away from football in 2023.

Then, much like Sean Payton, he could return in 2024 and pick his landing spot. That could allow him to land with a potential contender and avoid having to struggle through hard times with few resources.

And if there’s any coach that can afford to take a break, it’s McVay. He remains the youngest head coach in the NFL and has been since he was hired in 2017 at age 30. There’s no doubt he would be a hot commodity when he returned to the sport no matter how long any potential hiatus would last.