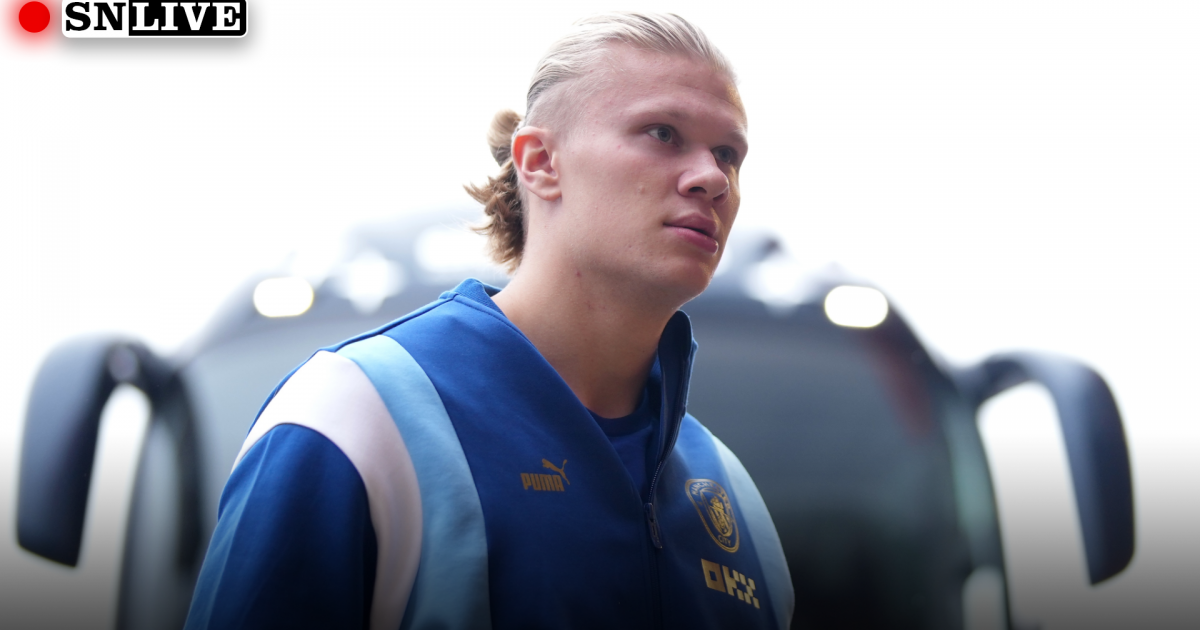 When the sides met in last October’s Manchester derby, City stormed to a 6-3 victory, with a couple of late Anthony Martial goals adding undeserved gloss to United’s efforts.

But Ten Hag’s men are on a run of eight consecutive wins in all competitions and would close to within a point of Pep Guardiola’s side if they can end a run of three straight derby defeats.

City are smarting from a shock 2-0 loss to Southampton in the Carabao Cup quarterfinals and will not want to lose ground on Premier League leaders Arsenal, who face Tottenham in their own derby showdown on Sunday.

37th minute: Eriksen slides the ball through to Rashford down the left channel. Ederson comes out to avert the danger with a far-less psychedelic piece of goalkeeping. United were able to isolate Rashford against Rodri there, which was a mismatch in terms of pace.

36th minute: Kevin De Bruyne curls a lovely ball towards the far post and Phil Foden gets behind Aaron Wan-Bissaka. He can’t adjust his body to do much of any use with the header though.

34th minute: Ederson, seemingly bored of the lack of goalmouth action, comes haring out of his goal and is rounded by Marcus Rashford. He was never getting to Bruno Fernandes’ raking pass first! Rashford fires into the goalmouth and Manuel Akanji is back to clear.

31st minute: Joao Cancelo with a sloppy giveaway and United are on the move. Bruno Fernandes looks to play in Tyrell Malacia, who is unceremoniously dealt with by Kyle Walker and takes a bang on the head for his troubles.

29th minute: A sharp interception from Bernardo Silva almost falls for Erling Haaland. United try to counter but the throughball runs beyond Marcus Rashford and all the way to Ederson.

27th minute: The game appears to be loosening up a little. Kevin De Bruyne finds Riyad Mahrez, whose low cross is blocked by Tyrell Malacia and United scramble away.

25th minute: Erling Haaland drops in effectively to link with De Bruyne, who sprays a pass left to Foden. The offside flag is up. Oohh, that looked tight.

23rd minute: Bernardo Silva chips the ball towards Riyad Mahrez in the box. It drops to Erling Haaland who takes a touch and sees his shot blocked by a combination of Fred and Casemiro flying towards him.

21st minute: It’s a good delivery from Riyad Mahrez but Casemiro, who really is magnificent in both boxes in these situations, heads clear.

18th minute: Fred is being a fabulous irritant to Kevin De Bruyne, following him around everywhere. A couple of successful snaps at the Belgium playmaker’s ankles just got the Old Trafford crowd going. City continue and Rodri looks to have a shooting chance on the edge of the box. It would have been a better idea than simply passing the ball out for a throw, which is what he does.

14th minute: United and Anthony Martial get chance to stretch their legs on the break. His cross-cum-shot is deflected and Joao Cancelo makes a vital challenge to get there ahead of Marcus Rashford.

12th minute: For those of you on Erling Haaland touchwatch, I’m not sure we’ve had one yet.

11th minute: Chance for United. Bernardo Silva uncharacteristically coughs up possession in a dangerous position and his compatriot Bruno Fernandes gets in to drag a shot wide.

9th minute: United were behind by this point in the previous three derbies. It’s a low bar cleared by Erik ten Hag’s men, but a significant one nonetheless.

7th minute: Kevin De Bruyne gets the first chance to stretch his legs and City work the ball left for Joao Cancelo to cross. United get back in numbers and Marcus Rashford is on hand to boot clear.

4th minute: Joao Cancelo hits and outside-of-the-foot pass down the United left to Bernardo Silva, who fires in a first-time cross. Neither Erling Haaland or Riyad Mahrez were on his wavelength and it skidded through the penalty area.

3rd minute: Ederson overhits a pass that Kyle Walker just keeps in for Manuel Akanji, who strides forward and boots it out for a throw. Some early nerves.

2nd minute: Joao Cancelo started at Southampton in the slapstick style but he sets a nice tone with a regal dribble forward from left-back before Christian Eriksen brings him down on halfway.

1st minute: Christian Eriksen gets us underway. Worth noting that in City’s ongoing run of three straight derby wins, they have scored inside the first 10 minutes on each occasion. Anthony Martial goes flying over Manuel Akanji’s back by way of saying “hello”.

5 mins from kickoff: it’s almost time. The teams are in the tunnel. Will United produce the defining statement of the Erik ten Hag era so far or will City reassert themselves as the dominant force in their hometown and in English football? It’s going to be fascinating finding out.

25 mins from kickoff: Pep Guardiola joked that he would come up with something “ridiculous” for this game, but it looks like a fairly conventional City team on paper. He has, of course, been here on these occasions plenty of times. This is the 500th top-flight match of Guardiola’s coaching career.

40 mins from kickoff: There are a few things to unpack from those lineups, but Luke Shaw’s inclusion is intriguing. The England international has been pretty sublime since reverting to centre-back over recent weeks, but tangling with Erling Haaland feels like an entirely different kind of challenge. If the Norway superstar plunders more goals and Harry Maguire, Lisandro Martinez and Victor Lindelof all watch on from the bench there will be questions for Erik ten Hag to answer.

On the other hand, it shows commendable and fairly typical boldness from the Dutchman. Tyrell Malacia bombing on from left-back, presumably with Fred offering cover, could give City a headache down that flank once you consider the in-form Marcus Rashford prowling with intent.

55 mins from kickoff: Manuel Akanji starts at centre-back for City alongside Nathan Ake in place of the injury John Stones. In a move that is sure to delight the travelling supporters at Old Trafford, Phil Foden starts.

1 hour from kickoff: The teams are in. Fred starts to bolster the United midfield, meaning Bruno Fernandes is likely to push into the front three. Luke Shaw remains at centre-back, with Tyrell Malacia outside him and Lisandro Martinez and Harry Maguire each on the bench.

1hr 15 mins from kickoff: Erik ten Hag revealed Anthony Martial faced a late fitness test due to a minor leg injury. Martial has arrived at the ground with his United teammates there are murmurs that he’s ready to play. That all-important team news will be with us in about 15 minutes.

1hr 30 mins from kickoff: Pep Guardiola conceded he has laid out some home truths for his players since the Southampton debacle. “All I can do is to tell my players the reality in good and bad moments. I have more experience than them. Not at playing football but at analysing what happens, I’m better than them,” he said. “I’m the only person to tell them the truth. After, I will insist until the last day I’m here what they have to do, if we are 10 points behind our situation or 10 points in front.

“That is my job. Put everyone in the team individually in front of their own mirrors to look at themselves. This is all I can do. I’ve done it in the past, recently, I will do it. Every day. I did it this week. Sometimes not saying anything, they see my face, they know exactly the situation. This is my job. Maybe they are not used to it because they are surrounded by people telling them how good they are. I am the only person in their own lives who can tell them exactly what the situation is.”

1hr 45 mins from kickoff: There is a mood of growing optimism around United, but Erik ten Hag is under no illusions over the task at hand today. “Manchester City are a team who will punish mistakes, so there is zero room for complacency or relaxing our standards in any way,” he said in his programme notes. “Today’s game is an examination of the progress we have made but, at the same time, City will know they are facing a strong opponent.”

2hrs from kickoff: The previous time these sides met, City absolutely ransacked United. They were 4-0 up at half-time, 6-1 up during the second half and Erling Haaland and Phil Foden each hit hat-tricks. Anthony Martial netted a couple of late goals to salvage a little pride as the game ended 6-3. It was arguably City’s best performance of the season but they come into this match on the back of indisputably their worst. Southampton, bottom of the Premier League, beat them 2-0 in the quarterfinals of the Carabao Cup on Wednesday as Pep Guardiola’s side failed to muster a shot on target.

2hrs 15 mins from kickoff: The stakes going into this one are high for City, who will want to trim Arsenal’s lead at the top of the Premier League to two points ahead of the Gunners’ own derby assignment at Tottenham on Sunday. Such demands are par for the course for a team that have won four of the past five league titles on offer. From a United point of view, this is probably the most meaningful derby for about five years. If Erik ten Hag’s in-form side can snap a three-game losing streak against their neighbours and extend their ongoing winning run to nine matches across all competitions, they will be just one point behind City in the table with a trip to Arsenal on the horizon next weekend.

2 hrs 30 mins from kickoff: Hello and welcome to the Sporting News’ coverage of the 189th Manchester derby from Old Trafford.

Diogo Dalot was substituted during the first half of United’s midweek League Cup win over Charlton Athletic and misses out, meaning Aaron Wan-Bissaka starts at right-back.

In midfield, Ten Hag brought in Fred to add extra solidity to an area City have dominated over recent meetings. Christian Eriksen keeps his place and Bruno Fernandes will move into the front three, where Anthony Martial led the line having passed a late fitness test.

Luke Shaw was preferred at centre-back to Lisandro Martinez and Harry Maguire. who are both on the bench

Kevin De Bruyne returned to the City lineup having rested up on the bench for the recent cup encounters with Chelsea and Southampton.

John Stones sat out the 2-0 defeat at St Mary’s with a knock and Guardiola said the England defender is still “not ready”. Manuel Akanji will reprise his partnership with Nathan Ake from the derby earlier in the season.

Phil Foden got the nod over Jack Grealish for a place in the City front three alongside Erling Haaland and the in-form Riyad Mahrez.

MORE: Why Wout Weghorst loan to Manchester United makes a lot of sense

The match will be streamed or televised by the following outlets around the world:

UK: BT Sport will carry the match on its TV and streaming platform.

USA: This match will be televised on USA Network (English) and Telemundo (Spanish) with both streams available on fuboTV.