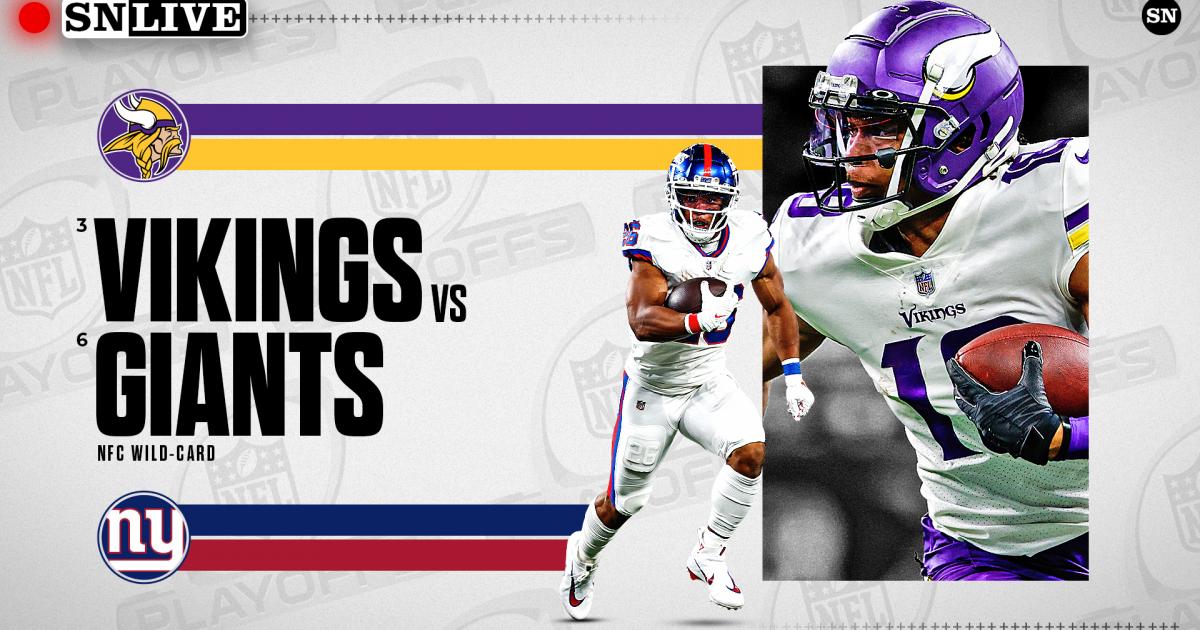 The Giants are playing their first playoff game in six years as they take on the Vikings in a wild-card round showdown Sunday in Minneapolis.

The G-Men enter the 2023 NFL postseason as the NFC’s No. 6 seed after posting a 9-7-1 record in their first season under head coach Brian Daboll. This will be the first career playoff game for Daniel Jones, Saquon Barkley and many others on New York’s roster.

They’ll look to pull off an upset on the road against the No. 3-seeded Vikings, who are led by fellow first-year coach Kevin O’Connell. O’Connell is familiar with win-or-go-home football — he helped lead the Rams to a Lombardi Trophy as their offensive coordinator last season.

The Vikings have been living on the edge all season; they’re 11-0 in one-possession games. They’ll be hoping to avoid another nail-biter, but they’ve shown over and over that they can deliver in crunch time.

Many have picked the Giants to pull off an upset against a suspect Vikings defense, but with playmakers like Justin Jefferson and Dalvin Cook lining up for the home team, it certainly won’t be easy.

Follow along as The Sporting News tracks all the key moments, updates and live scoring highlights from Giants vs. Vikings in the NFL playoffs.

5:10 p.m. TOUCHDOWN — Wow, what an answer! Barkley takes a pitch to the left side, gets a block and suddenly finds nothing but daylight ahead of him, jogging in for a 28-yard score! This game has started with a bang!

5:08 p.m. — After a catch by Richie James picks up 13 yards,  Jones scrambles right on 2nd and 7 to pick up the first down. One play later, he finds Darius Slayton for a 22 yard pickup. The Giants are moving the ball well here too.

5:06 p.m. — Saquon Barkley rips off a strong run on the Giants’ first offensive play, but it’s going to be called back for holding on Nick Gates to set up 1st and 20.

5:04 p.m. — Cousins was a perfect 7 of 7 on that drive, and he capped it off with a touchdown to boot. Not too shabby. How will the Giants respond?

5:03 p.m. TOUCHDOWN — There it is, after a slight delay! Cousins sneaks it up the gut and gets just enough to break the plane and open the scoring! What an opening drive by the Vikings!

Kirk goes 7-for-7 with a QB sneak for six on the opening drive! #Skol

5:02 p.m. — The call is overturned and they’ll spot the ball about a foot outside of the end zone.

5:00 p.m. — Jefferson makes a catch and heads for the right corner of the end zone, extending the ball towards the pylon… And the officials call it a touchdown! However, they’re going to take a look at this. He may have been just a hair short when his knee went down.

4:55 p.m. — Cousins finds Adam Thielen for another nice gain of 13 yards. Very strong start for Cousins in this one. After another catch by Jefferson and an encroachment penalty on New York’s Dexter Lawrence, it’s 1st and 10 Vikings inside the red zone.

4:53 p.m. — Dalvin Cook gets back-to-back handoffs and picks up another first down. Then, another completion over the middle to Jefferson moves the ball into Giants territory.

4:51 p.m. — Kirk Cousins takes the field for the first time today, and on the first play from scrimmage he throws a dart to Justin Jefferson for a gain of 10 yards.

4:50 p.m. — Here we go. One team’s season will end today, while the other will be one step closer to its ultimate goal. Kickoff is just moments away, with Minnesota getting the ball first on offense.

4:42 p.m. — The teams have taken the field as we draw closer to (delayed) kickoff in this NFC wild card showdown.

4:36 p.m. — Huge game for the Vikings. Will they prove they’re a legit contender with a good performance today?

Kickoff of Giants-Vikings has been pushed back to 4:50 ET, presumably because of the lengthy Dolphins-Bills game that has 9:19 remaining.

4:12 p.m. — Kickoff is drawing closer from snowy Minneapolis. I’m sure the players are happy they’ll be nice and warm inside that dome.

3:48 p.m. — Daniel Jones is out getting loose ahead of his first career NFL playoff game.

What channel is Giants vs. Vikings on today?

The Giants vs. Vikings matchup will be broadcast nationally on Fox, with Kevin Burkhardt (play-by-play), Greg Olsen (color commentary) and Erin Andrews (sideline reporting) on the call from Minneapolis.

In Canada, the game will air on TSN4/CTV.

For those hoping to stream the matchup in the United States, options include the Bally Sports App, FoxSports.com and fuboTV, which offers a free trial.

In Canada, streamers can tune in with a subscription to DAZN, which includes every NFL game.