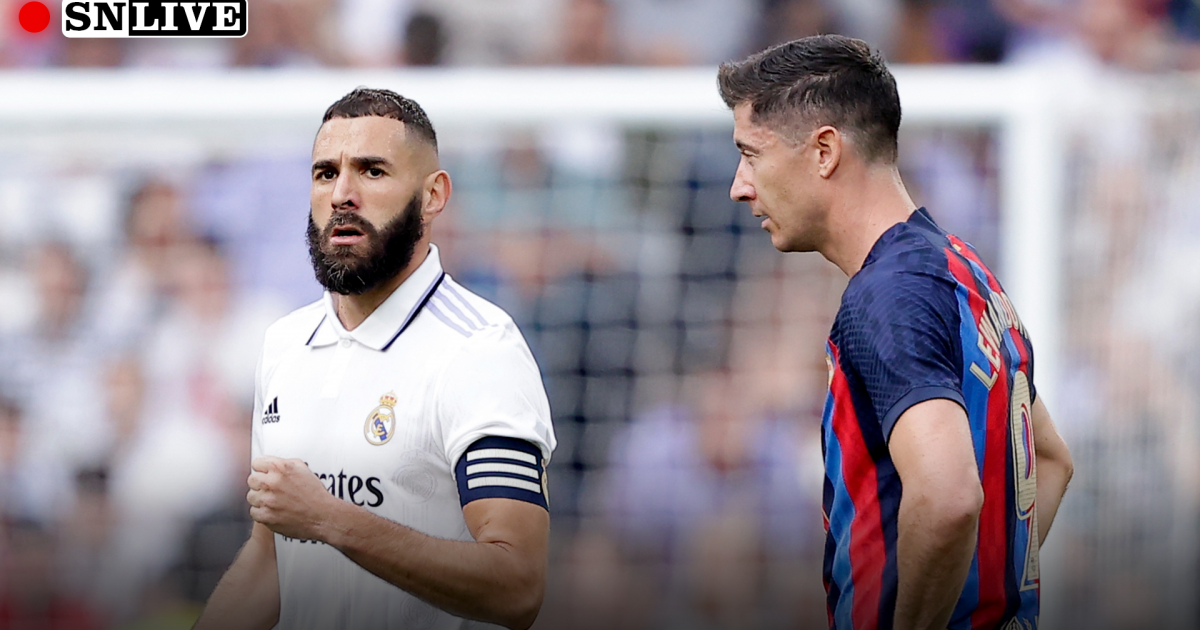 The first trophy of the season in the Spanish domestic calendar will be awarded as old heavyweight rivals Real Madrid and Barcelona meet in Saudi Arabia.

Both semifinals of the Supercopa de Espana came down to penalties, but the two Spanish giants held strong to dump Valencia and Real Betis out of the competition.

Robert Lewandowski takes the field for Barcelona looking to win his first piece of silverware at the Catalan club. They lead the La Liga table as well, and while the Polish striker is weathering a three-match suspension in league play, he’s able to feature in this mini competition.

On the other end, Karim Benzema is back and fit, having scored four goals in three games since returning from injury after the World Cup break concluded. He hit from the spot against Valencia to help Real Madrid through to the final.

Real Madrid vs Barcelona: First half

9th min: Vinicius Jr, who has been fouled the most of any player in La Liga, gets chopped down by a sliding Ronald Araujo challenge. The tackle comes outside the field of play over the touchline but it still counts, and gives a free-kick to Real Madrid in the middle third.

6th min: Chance, Barcelona! On a free-kick, Ronald Araujo somehow sneaks clear on the far post, and the ball from deep very nearly finds him as he slides towards the goal mouth, but it evades his stretch by inches. Very close, nobody marked the Uruguayan defender!

3rd min: Jules Kounde marshals the ball out of play with strength against Vinicius Jr who is pushing hard to win it back. Expect Kounde and Araujo to get plenty of Vini all match.

2nd min: Real Madrid possess the ball early but Barcelona generate a turnover in the attacking half, although little comes from it. Barcelona pressing quite high early on, but that likely won’t last terribly long.

Kickoff: The match between two heated rivals is under way from Saudi Arabia! It looks like Barcelona are indeed in a 3-4-2-1 with Ronald Araujo deployed as the right centre-back to defend Vinicius Jr.

13 mins to kick: Real Madrid are in good shape, but it must hurt to see talent abroad excelling for other teams, particularly in the Premier League. They still have to replace the likes of Toni Kroos and Luka Modric at some point too. Martin Odegaard would be quite useful for Los Blancos in that regard, but he is now at Arsenal, who are on their way to a Premier League title.

Real Madrid is now your source of breakthrough. Appreciate the greatest team ever.

36 mins to kick: Barcelona legend Sergio Busquets will make his 45th appearance in El Clasico, equaling the record of Lionel Messi and Sergio Ramos. He may get a chance to break that mark later this season. What a career!

45 – Sergio Busquets will make his 45th appearance in #ElClásico in all competitions, equalling Lionel Messi and Sergio Ramos as the players with the most appearances in the games between Real Madrid and FC Barcelona. Legends.#SuperSuperCup pic.twitter.com/VwKTlvmZ6V

62 mins to kick: There are questions about how Barcelona will be structured in this match. There are reports that Ronald Araujo will line up on the flank and mark Vinicius Jr, while others believe this is a three-CB formation. Vinicius has been in poor form of late, and needs a big match to break out of his funk. Araujo has struggled with injuries of late but has performed well when asked to play out wide. Barcelona did occasionally show a three-CB formation in the semifinal, which does lend us to believe that’s how they will play.

75 mins to kick: The Barcelona lineup is now out, and the speculation that Xavi might switch to a 3-4-2-1 proved accurate. Both Sergio Busquets and Frenkie de Jong are deployed as a midfield pivot, while the struggling Raphinha drops to the bench.

90 mins to kick: Incredibly, Carlo Ancelotti contests yet another final hoping to keep his streak alive, not having lost a final since 2014. He is fresh off winning the IFFHS 2022 Club Coach of the Year award just a few days ago, which is handed out by the International Federation of Football History & Statistics, the statistical overlords of FIFA. See more on the trophies Carlo Ancelotti has won here.

Real Madrid manager Carlo Ancelotti has been chosen as the #IFFHS Club Coach of the Year for 2022.

The Italian wins the award for the third time.

105 mins to kick: Real Madrid, for whatever reason, has already announced their starting lineup for the match, even though it doesn’t start for quite some time. There’s just one minor surprise, as Rodrygo drops to the bench in favor of Luka Modric, who returns to the starting lineup and bumps Federico Valverde up to the wing.

Camavinga starts, Valverde on the RW and Rodrygo on the bench against Barcelona.

120 mins to kick: Before things get serious and these two teams play for a title, here’s a little fun from the Barcelona social team, as Pedri and Ansu Fati play a game of 7-Second Challenge with each other, where they try to answer questions quickly. Always good to see a bit of the players’ personality!

Luka Modric was rested against Valencia in the semifinal, and he returns as expected to start the final. It was thought that Eduardo Camavinga, who’s reportedly not 100 percent, would drop to the bench, but instead it’s Rodrygo who falls out, as Federico Valverde moves up into the attack. Ferland Mendy also returning to the XI after Nacho Fernandez served as the starter against Valencia.

After starting the semifinal on the bench, veteran midfielder Sergio Busquets was expected to return to the XI, and he does, slotting into the middle. Sports daily AS posited a scenario in which coach Xavi Hernandez opts to play with four midfielders, in which Frenkie de Jong would come in for Raphinha, and that ultimately came true.

Reports also indicated that Ronald Araujo, who trained separately from the team on the eve of the match, would be tabbed to return. That also comes true, with Andreas Christensen entering at centre-back to partner with Jules Kounde and Araujo in a three-at-the-back system. Ousmane Dembele will play wing-back opposite Alex Balde.

How to watch Real Madrid vs Barcelona

Select broadcasters in countries around the world have carried the Spanish Supercopa matches, including in the UK and USA.

For other regions that don’t have a local broadcast or stream, fans can access the matches on streaming platform Shahid VIP, as indicated by LiveSoccerTV.

UK: The Supercopa will be carried in the UK on BT Sport’s TV and streaming platforms.

USA: The match will be televised on ABC (English) and ESPN Deportes (Spanish) with both those televised matches streaming on fuboTV. ESPN’s streaming service ESPN+ will also carry streams in English and Spanish for subscribers.

MORE: Everything to know about the Spanish Supercopa 2023

Barcelona have the slight edge according to the betting markets, with goals also expected in the match.

Although not listed in the table below, the betting numbers say that Robert Lewandowski has the better likelihood to score at nearly even money odds, with Karim Benzema at nearly the same price.