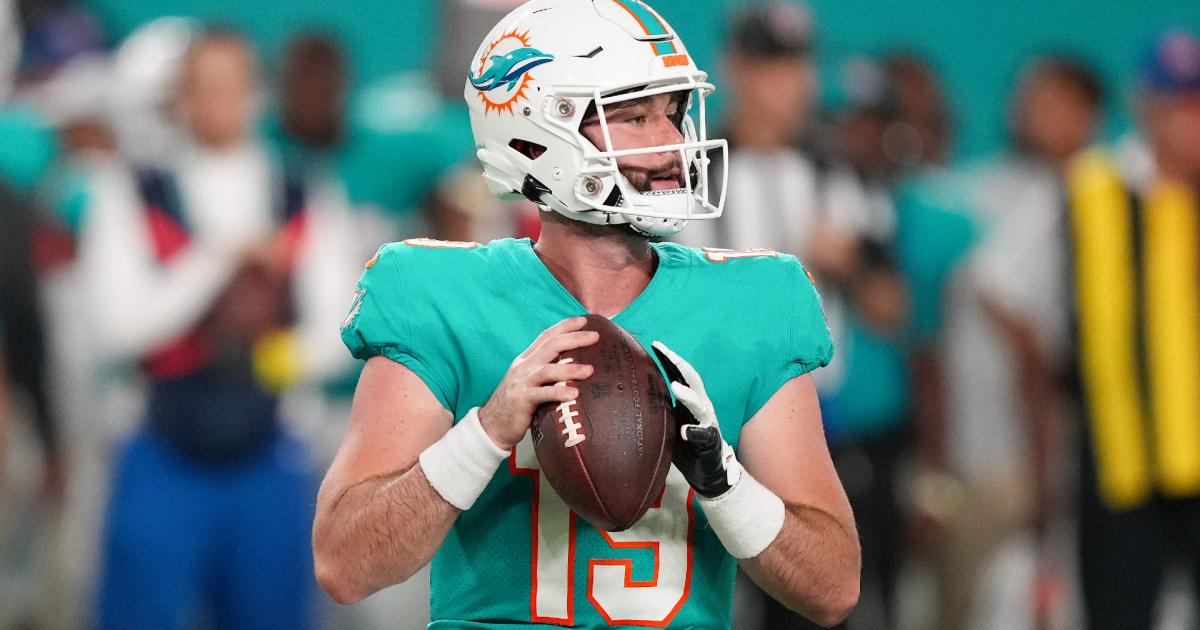 The Dolphins were able to sneak into the 2023 NFL playoffs thanks to their 11-6 win over the Jets — and some help from the Bills — in Week 18.

The Bills beat the Patriots 35-23 in Buffalo to knock the Patriots out of the No. 7 seed. That allowed Miami to leapfrog New England in the AFC standings and earn passage to the postseason for the first time since 2016.

Unfortunately for the Dolphins, they won’t be at full strength for their wild-card game Sunday at Buffalo. In fact, they will be forced to start their third-string quarterback because of injuries to Tua Tagovailoa and Teddy Bridgewater.

Skylar Thompson will be making the start.

Thompson isn’t familiar to many NFL fans. He is making just his third start of the season, and he will need to have his best day to give the Dolphins a chance against the conference’s No. 2 seed in a win-or-go-home game.

Who, exactly, is Skylar Thompson? Here’s what to know about the rookie as he gears up for the biggest game of his football career to date.

MORE: Breaking down the Dolphins’ quarterback depth chart with Tua Tagovailoa out

Who is Skylar Thompson?

Thompson is a quarterback the Dolphins selected with their final pick in the 2022 NFL Draft. The 25-year-old was selected in the seventh round and made the Dolphins team as a third-stringer after impressing in the preseason.

Thompson had a 138.4 passer rating across three preseason games, good for the best mark in the NFL, and he racked up 450 passing yards, five touchdowns and zero interceptions while completing 75 percent of his passes.

The results during the regular season haven’t been as good for Thompson. He has started two games and played a majority of three; he has a 1-1 record but has completed just 57.1 percent of his passes for 534 yards, one touchdown and three interceptions.

Still, Thompson earned a win in the Dolphins’ all-important victory last week over the Jets. Now, he will be tasked with keeping them competitive against the Bills.

Thompson played college ball at Kansas State. He spent five seasons with the Wildcats and started 40 of the 45 games in which he played.

Thompson had a 24-16 record as a starter and ranked second in program history in passing yards, passing touchdowns and completions when he left the school. His 68 total touchdowns rank as the third-most in school history.

Below is a look at Thompson’s year-by-year passing stats.

Thompson also rushed for 1,087 yards and 26 touchdowns during his five years at Kansas State.

Thompson was chosen in the seventh round of the 2022 NFL Draft. He was the 247th overall selection and the second-to-last quarterback picked.

Thompson was one of nine quarterbacks selected in the 2022 draft:

Seven of those nine quarterbacks have made starts at the NFL level. Only one — Oladokun — is no longer with the team that selected him.

Thompson is one of just three quarterbacks the Dolphins have drafted over the past decade. They selected Brandon Doughty in the seventh round of the 2016 NFL Draft and took Tua Tagovailoa with the No. 5 overall pick in the 2020 NFL Draft.

Why the Dolphins are starting Skylar Thompson over Tua Tagovailoa?

Some may be wondering why Thompson is starting over Tagaovailoa in the playoffs.

This choice wasn’t made because of ability; it was all about availability.

Tagovailoa suffered a concussion during the Dolphins’ Christmas Day loss to the Packers. He remains in concussion protocol and hasn’t been cleared to resume football activities.

It isn’t clear when Tagovailoa might be able to return. The concussion is his second of the season, though some question if it is actually his third. He exhibited signs of one in Week 3 against the Bills. Either way, the Dolphins are approaching his return with caution, and that’s why they ruled him out for the game on Wednesday.

Teddy Bridgewater is Tagovailoa’s backup, but he is dealing with a dislocated pinkie on his throwing hand. He may be able to dress for the game, but coach Mike McDaniel said that the plan was to prepare Thompson to be the top quarterback against the Bills.

So, Thompson will get to make a playoff start during his rookie season.