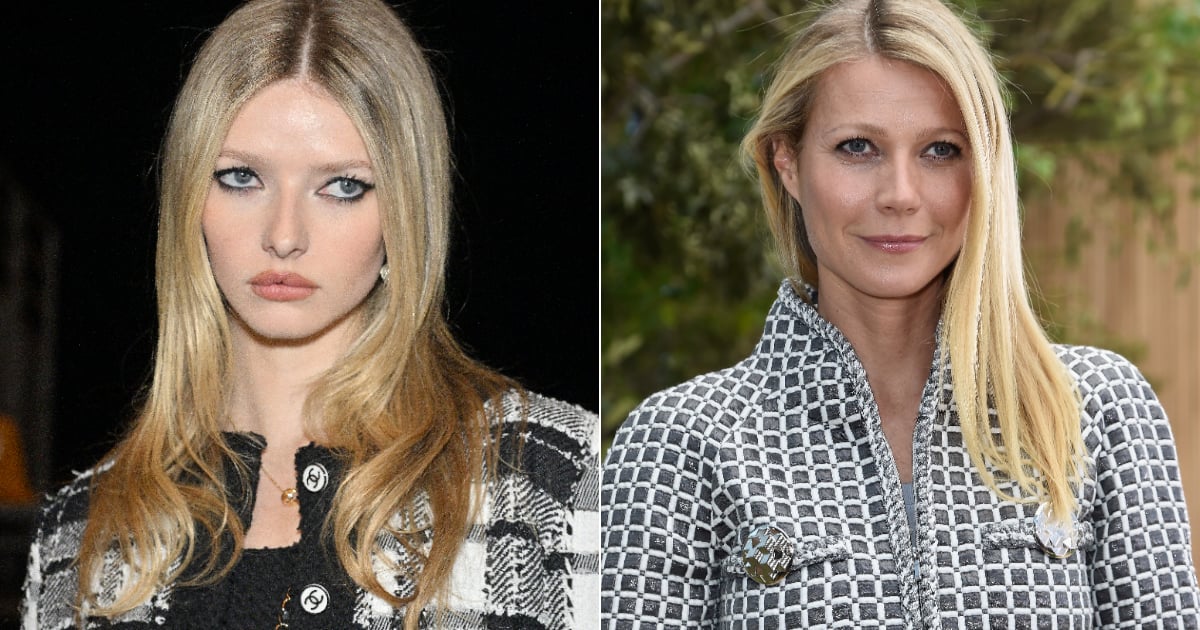 Gwyneth Paltrow’s daughter, Apple Martin, sat front row for the unveiling of the Chanel Haute Couture spring/summer 2023 collection, marking her first runway show ever. The Jan. 24 event took place during Paris Fashion Week, which has already seen appearances by the likes of Kylie Jenner and Doja Cat at Schiaparelli, and Anya Taylor-Joy at Dior. Eighteen-year-old Martin, whose father is Coldplay musician Chris Martin, arrived in classic tweed black-and-white checked suiting from the fashion house, which she accessorized with block-heel loafers; a miniature crossbody flap bag with a playful beaded strap; a delicate Coco necklace; and shimmering heart drop earrings. Martin parted her long, blond hair at the center and opted for a heavily lined eye, peach lip, and ballet pink manicure.

The outfit was not entirely different from the one Paltrow sported to the Chanel Haute Couture spring/summer 2016 show: a gemstone embellished cropped jacket and matching pleated midi skirt in the same palette. The lookalike mom and daughter duo can now both be considered muses of the brand, with fashion editor Derek Blasberg seemingly confirming the budding relationship on Instagram: “Karl Lagerfeld met Apple Martin when she was 4 years old and declared that one day she’d be a Chanel girl. It happened today! 🍎🤍🇫🇷,” he wrote, further commenting underneath his caption: “That proud guncle feeling 😍.”

The line debuted consisted heavily of neutral colors, with embroidery of the animal world imagined by artist Xavier Veilhan, who has now worked with creative director Virginie Viard on three separate projects. Kittens, corgis, rabbits, and swallows were stitched onto skirts and dresses, and even the final bridal look that closed the show, which was replete with a veil covering. The lineup of models cast were noticeably lacking in body diversity, but they burst onto the scene from behind monument-style animal carvings Veilhan installed onto the catwalk, made to depict a village square.

The front row also included Chanel regulars such as Sadie Sink, Lucy Boynton, Marion Cotillard, Vanessa Paradis, and Tilda Swinton, all of whom took their pick of glittering tweed designs and statement-making accessories for their close-ups.

Ahead, see Martin’s Chanel moment and shop some of her essentials, then see the rest of the stars at the show, along with key looks from the runway.