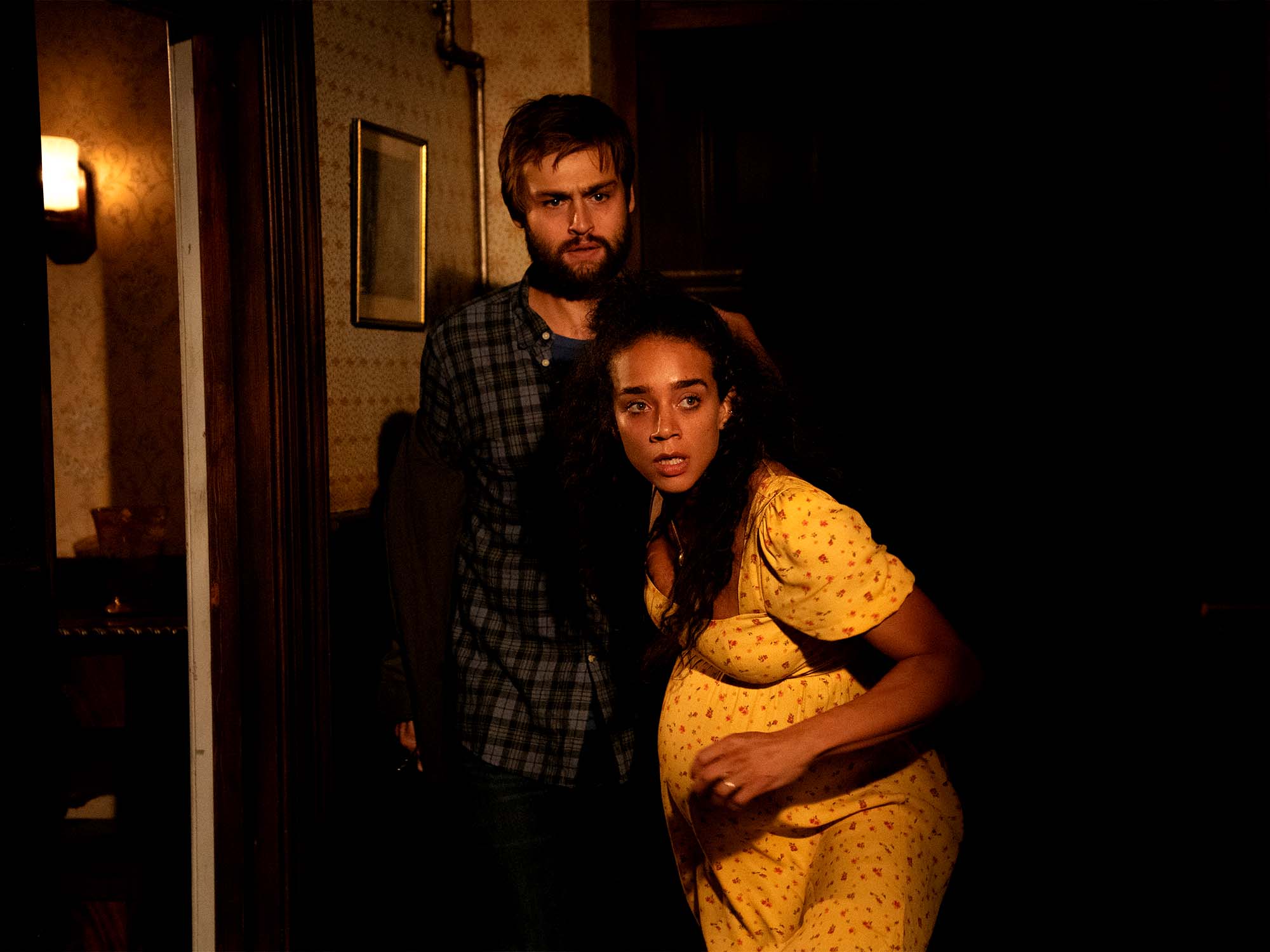 When Maya (Hannah John-Kamen) learns that she is pregnant, her husband Jamie (Douglas Booth) purchases a celebratory bottle of alcohol-free Prosecco from the corner store, unwittingly picking up a trio of violent thugs who follow him back home and break into the couple’s London apartment. Overwhelmed and viciously beaten, Jamie is left to watch helplessly as Maya is also attacked and fails to take an opportunity to stab the gang’s taunting ringleader. Only the arrival of the police saves them. Cut to a little under nine months later, and the couple, still rattled by this harrowing event, moves to the idyllic Irish countryside, where Jamie has inherited a house from his recently departed Aunt Maeve.

Like its new owners, the house is in a state of disrepair, but there is hope here for building a better future. The local pub’s landlady (Niamh Cusack) warns that an offering of meat must be left in their back garden every night to keep at bay the far darrig – mythical little people in red caps. Yet Jamie and Maya are soon more preoccupied by the dysfunctional family – Daddy Whelan (Colm Meany) and his adult children Killian (Chris Walley), Aisling (Jamie-Lee O’Donnell) and Eoin (Kristian Nairn) – whom they have hired to fix up the house, and whose bullying delinquency will quickly prove a trigger for the trauma of both raw Maya and angry, emasculated Jamie.

Anyone who has seen director Jon Wright’s previous boozy creature comedy Grabbers might expect Unwelcome to resemble the madcap chaos of Gremlins or Ghoulies, but while there is a bit of that, the tone is more sober. For here, like in David Bruckner’s The Ritual, a traumatic urban scene is replayed and reprocessed in a wilder setting. As one home invasion in inner city London is followed by another in backwoods Ireland, in this bloody reprise of all past anxieties, the now heavily pregnant Maya is tested as to just how far she has gestated into a ‘mamma bear’.

Much as Aunt Maeve’s house and garden are separated from the wild woods by a stone wall, the psychological and the supernatural similarly abut one another as two sides of the same divide. Though presented as murderous mischief makers, the goblin-like Red Caps are also vivid metaphors for the trauma which sufferers can negotiate only at a costly price. If this is a tale of two families, one civilised, the other feral, the far darrig bridge the difference between these two clans with their own grotesque parody of a family. For not unlike the Whelans, these tiny, child-like creatures are defined in their savagery by the absence of a mother to nurture them – and Maya will step in to fill that gap with her own immense capacity for both loving and ferocious protectiveness.

So Unwelcome unfolds in the fairyland where Straw Dogs and Wrong Turn meet Irish folk horror, as an English woman comes to realise the sacrifices that it takes to become a true Irish mammy.

More serious and psychological than its predecessor.

The mother of Irish folk horror.