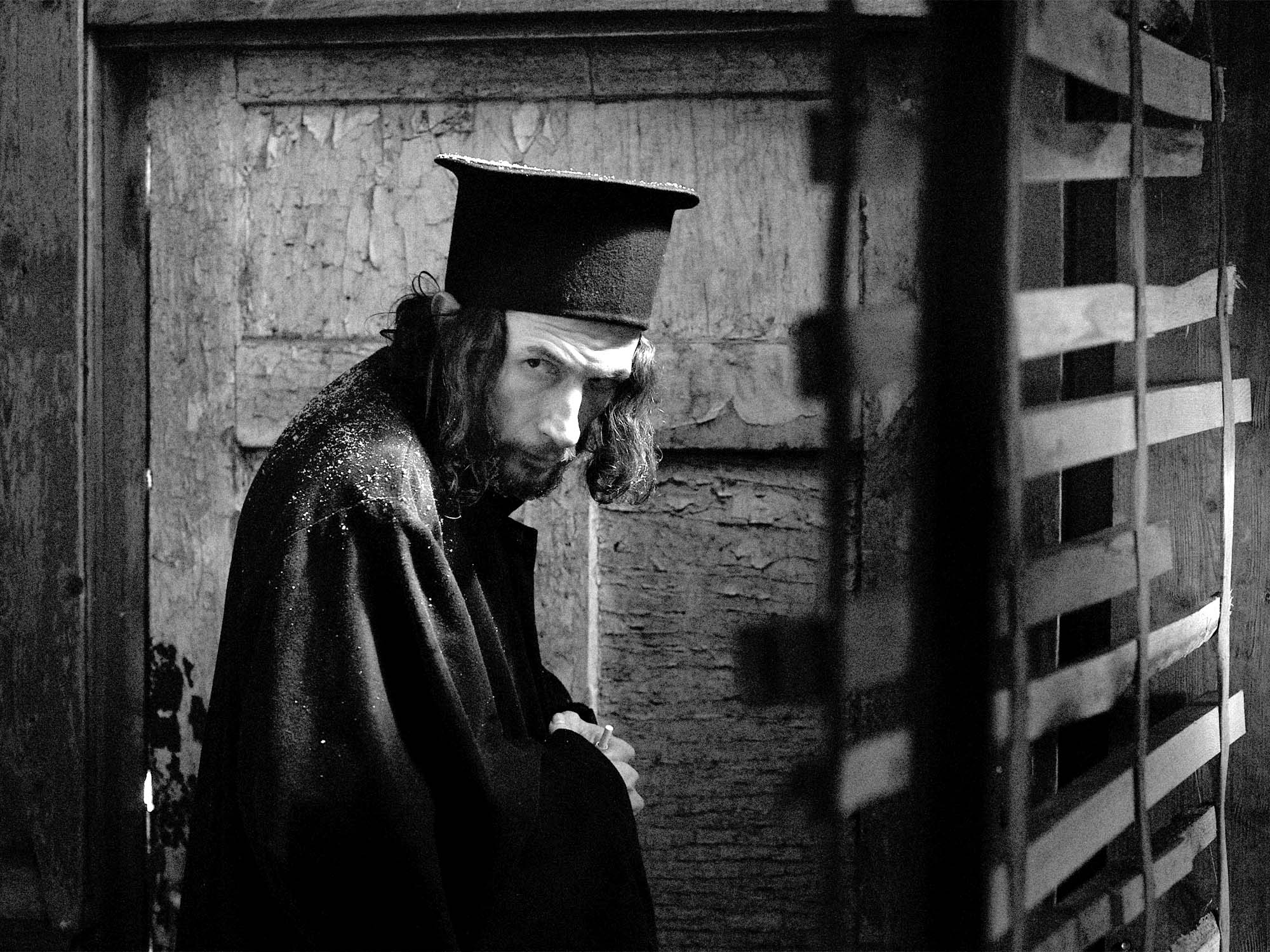 Two men snowed in at a remote cabin await the return of their boss in Andrey Paounov’s unique, existential horror.

At the beginning of January, a porter (Samuel Finzi) and an Old Man (Iossif Surchadziev) while away their time eating walnuts and doing a crossword as they await the return of their boss Petar Motorov. The clues of the crossword concern world literature, global geography and international cuisine – in other words, about a whole universe beyond these men’s immediate, enclosed environment in a snowbound cabin near the woods. The porter only occasionally ventures to enter the adjacent, abandoned Soviet-era hotel, its ruins decorated with fallen portraits of Marx, Engels, Lenin and Brezhnev. There he refuels the generator that keeps the lights and heat on in this otherwise dark midwinter.

They might as well be waiting for Godot. For as the horse-drawn sleigh returns with not Petar Motorov but a frozen wolf, and as a succession of visitors: twin brothers (Zachary Baharov and Svetoslav Stoyanov) whose snowplough has broken down nearby; a muscly tattooed priest (Leonid Yovchev); a smiling Mummer (Borislav Chouchkov) and his three masked accompanists.

These all call into question whether Petar Motorov is real or a mere legend before they all likewise disappear into the dark woods on that same sleigh. The film, too, becomes a puzzlebox for the viewer, drawing us into its compounding enigmas and demanding that we think our way out of hermetic spaces in which we, along with the characters, have become lost. For here the raven that the Old Man keeps in a cage, and the lobsters that the porter tends in tanks in the hotel’s repurposed rooms, are metaphors for a very human condition of trying to grasp the infinite and the metaphysical from within the narrow confines of mortal, embodied experience.

In its adaptation from Yordan Radichkov’s 1974 allegorical play of the same name, January has also accumulated all manner of cinematic references. Its (mostly) monochrome presentation, folkloric fixations and even its very title evoke Rainer Sarnet’s 2017 film November, while its marriage of realism and the irrational, politics and parable recalls Béla Tarr’s similarly black-and-white 2000 work, Werckmeister Harmonies.

The snowbound setting, all-male cast, beleaguering peril and paranoia suggest John Carpenter’s The Thing from 1982, while the frozen hotel, an axe, twin children in a corridor, an infernal Bartender (Malin Krastev) and an old interior painting apparently, impossibly depicting the main players, all specifically reference the timeless chills of Stanley Kubrick’s The Shining.

Yet the horror in January is of a more existential order, as these men are confronted with decidedly Cartesian conundrums: are they awake or dreaming?; might they even be, as in the famous Taoist riddle, part of an animal’s dream?; or are they indeed alive or dead? “It’s always like this in January”, the Bartender will tell the porter, in words that reflexively conjure the film’s title. “The wind blows over the snowdrifts and you can’t be sure of anything.” That sense of uncertainty pervades this first fictive feature from documentarian Andrey Paounov, which is beautiful and unnervingly eerie in equal, equivocal measure.

The thrill of coming to something about which we have zero knowledge.

Moody mystery of masculinity and mortality.