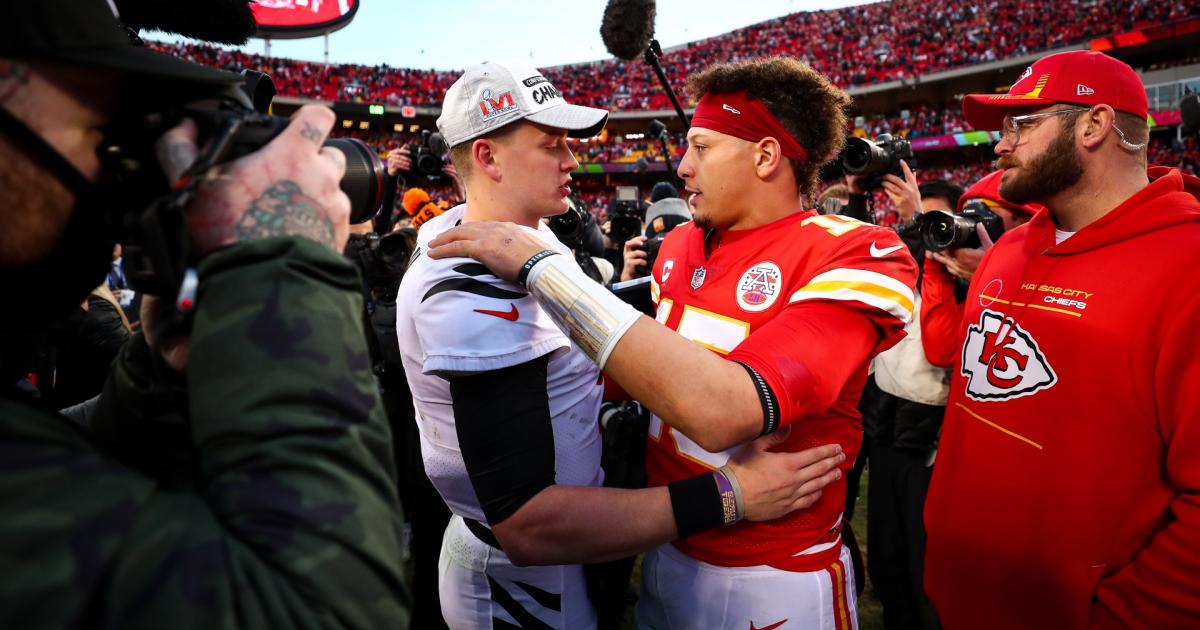 Is “Burrow vs. Mahomes” the next “Manning vs. Brady?”

The Cincinnati Bengals meet the Kansas City Chiefs will meet in the AFC championship game for the second straight season, and the quarterback duel between Joe Burrow and Patrick Mahomes II comes into focus.

This marks the 10th time two quarterbacks have met multiple times in the conference championship round, and everybody knows the standard in that regard.

While there is no comparison to Brady and Manning, there is more than enough evidence to support the claim the Burrow-Mahomes quarterback rivalry will stand on its own. Bengals receiver Tyler Boyd wasn’t afraid to make the comparison before Cincinnati and Kansas City played in Week 13.

“It’s going back to that quarterback fight,” Boyd said. “I look at it like Manning and Brady.”

Looking at some of the other quarterback rematches in conference championship history, and you can get a clue about just how timeless the Mahomes vs. Burrow dynamic could become.

While it is fashionable to label any trending quarterback rivalry, it is important to remember Brady and Manning combined for 14 Super Bowl appearances and nine championships.

They met four times in the conference championship game, and Manning won three of those four games between the Colts and Broncos.

Brady, however, had other rivals. He met Pittsburgh’s Ben Roethlisberger and Baltimore’s Joe Flacco twice each in the AFC championship game, and he even added a head-to-head against Green Bay’s Aaron Rodgers in 2020 in the NFC championship game.

All that said, the quarterback rivalry between Manning and Brady has defined QB matchups in the 21st century.

The Super Bowl era began with the 1966 season. Burrow and Mahomes will be the 10th pair of quarterbacks to meet more than once in either the AFC or NFC championship games.

Brady and Manning set the standard with four conference championship

matchups, but they never met in consecutive seasons. Burrow and Mahomes are the first quarterbacks to meet in back-to-back seasons since Brady and Flacco split AFC championship games with the Patriots and Ravens in the 2011 and 2012 seasons.

Why Burrow vs. Mahomes could define 2020s

Mahomes and Burrow is the best quarterback rivalry in the game right now. Yes, better than Mahomes vs. Buffalo’s Josh Allen (we’ll back that up shortly). Mahomes and Burrow carry some of the same elements as the Manning-Brady rivalry, but the contemporaries are not dopplegangers by any stretch.

Burrow, 26, is the former No. 1 pick like Manning, but he’s also enjoyed early playoff success like Brady. Burrow is 5-1 with a 98.4 passer rating in the postseason, and that includes road victories against Mahomes and Allen. A victory in the AFC championship would give him a shot to be Heisman Trophy-winning national champion and Super Bowl winner in a four-year stretch.

Mahomes, 27, is the most-decorated young quarterback in the game. He has Manning’s statistics. Mahomes could win a second NFL MVP award thi season, and he has the highest passer rating of all time at 105.7. The one-time Super Bowl champion also is on the most-successful franchise like Brady was in New England. The Chiefs are making their fifth straight AFC championship appearance, and Mahomes had to learn by losing to Brady in the 2018 AFC championship and Super Bowl LV.

The other wrinkle here? The Bengals have won the last three meetings between the teams – all by three points. That includes last year’s 27-24 thriller in the AFC championship game. Burrow averaged 327.3 yards with eight TDs and one interception in those games. Mahomes averages 252.3 yards per game with six TDs and two interceptions in those games.

The Brady-Manning argument was the most-compelling drama in the NFL, and it lasted almost two decades? Will Mahomes and Burrow have that kind of staying power in the social-media driven debate world?

At minimum, Burrow vs. Mahomes could define the decade. There have been three quarterbacks matchups that materialized three times in the the conference championship round.

The Steelers and Raiders met three straight seasons from 1974-76, a rivalry that spawned the “Immaculate Reception” and John Madden’s Super Bowl run. Terry Bradshaw had a 2-1 advantage on Kenny Stabler in those games.

The Broncos tormented the Browns with three AFC championship victories in 1986-87 and 1989. John Elway beat Bernie Kosar in all three matchups.

The Cowboys and 49ers played in three straight NFC championship games from 1992-94, and Aikman had a 2-1 advantage in those three meetings.

Who could spoil Burrow vs. Mahomes rivalry?

Ben Roetlhisberger was always the third wheel in the Manning vs Brady debate, and Big Ben won a pair of Super Bowls but he never beat those quarterbacks on the AFC championship game stage. He did beat Manning in the 2005 AFC divisional playoffs.

Will that be Josh Allen’s fate? He’s 0-3 against Mahomes and Burrow in the postseason, with a loss in the 2020 AFC championship game. The 42-36 loss to the Chiefs in the 2021 AFC divisional playoffs was one of the greatest games of all time, but it was still a loss. This year’s 27-10 to the Bengals created a little bit of separation for Burrow in this argument.

Who else? Jacksonville’s Trevor Lawrence and Los Angeles’ Justin Herbert are among the quarterbacks who could break up the monopoly atop the AFC the last two seasons, but they will have to prove it in the playoffs.

Right now, that’s Burrow and Mahomes. There is a long way to go to reach the Manning-Brady standard, but given both quarterbacks have accomplished this much this fast, the potential is there.

Get back to us at the end of the decade.